Their experience in that year showed enough promise for success that in May of 2010, they used a 6-row Unverferth Ripper Stripper to strip-till over 100 acres of corn ground prior to irrigating and planting. This implement allowed them to strip-till to a depth of about 14 inches which was deeper than the 8 or so inches that they achieved in 2009.

Ezequial Jr. spent considerable time and put much effort into optimally adjusting the Ripper Stripper and ended up staggering the two wavy coulters that follow the subsoiler parabolic shanks so as to allow better “flow of soil and residue” through the coulters and less balling up.

His measure of success for his 2010 strip-till fields will be 40 tons/ac of corn silage. 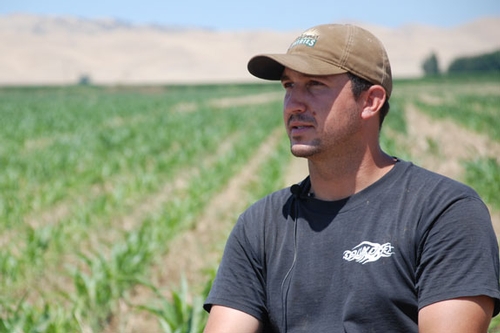 Turlock farmers have been no-tilling for five years

Michael and Adam Crowell of Bar-Vee Dairy in Turlock, Calif., have been no-tilling their winter small grain, twin-row corn and sorghum sudan for five years.

They use a John Deere 1590 no-till drill to seed wheat or triticale in the fall and also they use the same drill to establish a sorghum sudan triple crop following corn chopping. Corn is direct seeded with a Monosem twin-row planter that staggers two seed lines every 30 inches in flat plantings (pictured below right).

One problem that has surfaced in the Crowell’s CT system is the natural consolidation or settling of their largely sandy soil that has created low spots where irrigation water tends to collect resulting in poor crop growth.

To address this problem, they will do a shallow landplaning following this summer’s crops. 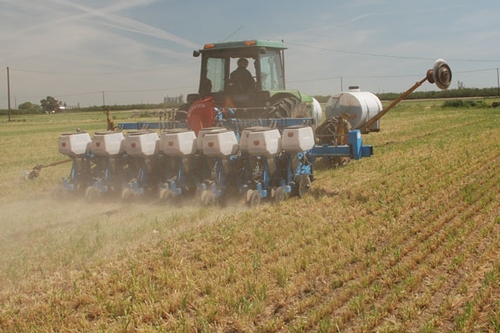