This is a preview of an article for Progressive Crop Consultant magazine.

Recently, two types of evidence have emerged to indicate that farmers must make substantial changes in their crop production systems in the future.  The first is economic. If farmers want to preserve their markets, they must use farming practices in alignment with buyer preferences. This concept appears front-and-center in the You Tube video, “How to future-proof your farm (and not become obsolete!),” by Pennsylvania farmer Steve Groff.

“Is your farm becoming obsolete?” Groff asks. “There are changes coming over the horizon in our industry that have ripple effects and are forcing farmers to make difficult decisions about how they manage their soil. The reality is that you will come face-to-face with the supply chain that you are a part of.”

As Groff points out, if you don't improve the way you're doing things, your markets will disappear.

This economic point was further driven home in the opening keynote address by Nestle vice president Patricia Stroup at last fall's Sustainable Agriculture Summit in Indianapolis. Stroup spoke to over 650 of the world's major food brand and market representatives. “If you want to sell your food to us, you'll meet our specifications,” was her stern admonition.

Nestle, by the way, is the world's largest food company – buying and selling food in every country on the globe.

Now, just what are these “specifications” for how crops are produced?  Where do they come from and what are they based on?  The answer is simple.  It's all about HEALTH – soil health, farm health, and human health.  Strengthening connections between these three dimensions of planetary health is now gaining momentum in the public, markets that farmers rely upon, but also increasingly by medical health experts. There is now a growing recognition that human health is intimately connected to the nutritional quality of the food we eat, which in turn is connected to the health of farms that produce the food, and ultimately to the health of the soil in which crops grow.  These converging values lead to the recognition among a growing sector of society that ‘food is medicine' and that nutrient-dense, pesticide-free food comes from healthy farms with biologically active soils.

There are now several visionary physicians and healthcare administrators on the front lines of this emerging arena calling for us to build bridges between human health, farm health and soil health.  ALL IN Alameda!, a collaborative initiative led by Alameda family physician Dr. Steven Chen, MD, is a shining example of integrative medicine. Recognizing the value of high-quality food, county clinics in Alameda are partnering with local organic urban farmers and writing vegetable prescriptions for patients. They are making remarkable positive impacts on a number of health indicators,including diabetes and hypertension, conditions that frequently afflict the largely low-income population in urban “food deserts.”  Dr. Chen is fond of quoting writer and environmental activist Wendell Berry: “People are fed by the food industry, which pays no attention to health, and are treated by the health industry, which pays no attention to food.” Dr. Chen adds, “and both the food and health industries pay no attention to the agricultural industry.”

The evidence that supports new food and crop production paradigms is growing stronger.  Markets are leaning toward supporting farmers who use practices that contribute to a healthier food system and ultimately, healthier people, and, in turn, lower-cost healthcare.  Focusing on an “agricultural revolution” will compensate farmers for cultivating the land and delivering “public goods” in terms of climate change mitigation, ecosystem conservation and public health outcomes. Governments, including Great Britain, are moving to scale up incentives to farmers employing such practices.

There is also strong ecological evidence in support of a farming revolution. Overall soil health is directly affected by reducing disturbance, keeping the surface covered and encouraging biodiversity both above and below ground (Photo 1).  Research shows that farmers who use ‘natural systems' gain a host of important benefits, including the ability to use less fertilizer and water, capture and store more carbon, and require fewer inputs overall.  Our research in California's San Joaquin Valley, for instance, has demonstrated that the combination of no-tillage (reduced disturbance) with cover crops reduces water applied over the course of the season by 13%, the equivalent of about 4 to 5 inches. In addition, no-till cuts dust emissions from the field by over 75%,and combining no-till with cover crops leads to increases in soil carbon, water infiltration, soil aggregation, water holding capacity and biological diversity.  The ecological evidence from many other sources around the world support these soil care, conservation agriculture practices.

The early-generation pioneers who have become successful using these techniques tend to be organic farmers who seek to emulate natural systems.  A group of California farmers who have been leaders in soil care, worker health and farm health are now working together through an NRCS Conservation Innovation Grant (CIG) project to develop crop production system alternatives for vegetable crops. (Photo 2).  More information about this group is available at our Conservation Agriculture Systems Innovation (CASI) website and by joining our project's Collaborative Tools network http://casi.ucanr.edu/? Blogpost =40712&blogasset=14128.

It's now time to work together to scale-up improved farming systems across the board. We should no longer view food as just a substance to be bought and sold as cheaply as possible, but rather food as medicine.  Paul Muller, a Guinda organic farmer and member of the CIG project, puts it this way: “We are at a point where many people are asking how our farming systems can do more for the common good.  Long-term soil stewardship and health soil is a common good;  thinking through water stewardship in healthy soils enhances the common good; finding strategies to support and nurture those who grow our food and tend or steward our resources for the long-term is a common good;  putting more carbon through cover crops and reduced tillage of the soil and keeping carbon as a food for a teeming microbial universe there is a common good;  keeping that soil covered, minimizing dangerous pesticides in the food system is a common good; growing more nutrient-dense food is a common good.  It is all related and companies can invest in this supply chain and support its growth and create a supply chain of value where all parts are rewarded for doing something good for consumers.  The question is, ‘Who pays for the defense and enhancement of the common good?'"

This is not going to be an easy question to answer. Fortunately,innovators are beginning to put the pieces together. (Photo 3).  One such effort involves the National Cotton Council, the U.S. Cotton Trust Protocol, Cotton Incorporated, and cotton farmers, such as John Teixeira of Firebaugh, who has many years of experience with soil health management systems. The organizations are working with companies like Wranglers, Levi-Strauss, and Walmart, and researchers with experience in both the soil and human health domains. Read more about this effort here: http://casi.ucanr.edu/?blogpost=39614&blogasset=14128.

Federal and state government agencies are also involved in similar soil health initiatives.  In 2012, the USDA's Natural Resource Conservation Service launched “Unlock the secrets of the soil,” a major national education and awareness campaign about the core principles of conservation agriculture and soil health. This initiative will have a broad impact in many regions of the country. The California Department of Food and Agriculture's Healthy Soils Program, started in 2017, is now also having similar impacts and benefits  (https://wwwcdfa.ca.gov/oefi/healthsoils/).  Indeed, CDFA has invested over $50 million and supported 307 projects incentivizing adoption of core soil health management practices.

However, it is ultimately the pioneering, visionary farmers who are leading the movement (Photo 4).  As renowned author David Montgomery puts it in “Growing a Revolution – Bringing our soil back to life,”“the movement is growing bottom-up, fueled by individual farmers rather than governments, universities, or environmental advocacy groups.” The excitement and the future of our food system is now in the hands of farmers who see a better way forward and are working hard to get there.

There are now clear roles that professional crop consultants can play. Imagine contributing creatively to the development of a completely new paradigm for farming systems that emphasize soil, farm and human health. Imagine becoming part of the effort to push far beyond IPM strategies that have been developed over the past 50 years and creating systems that are pesticide-free. The economic and ecological evidence suggests that we have a commanding mandate to do so. 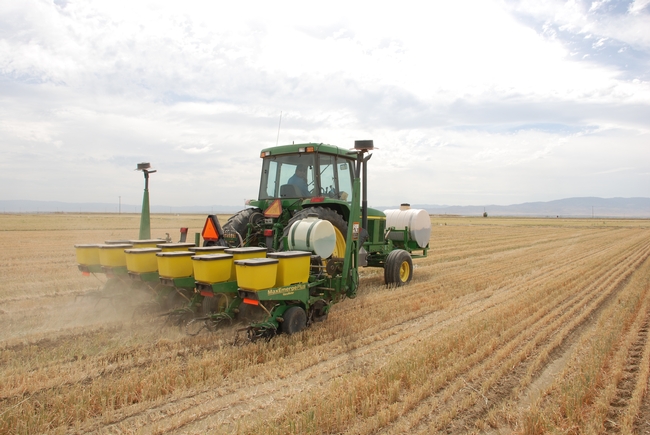 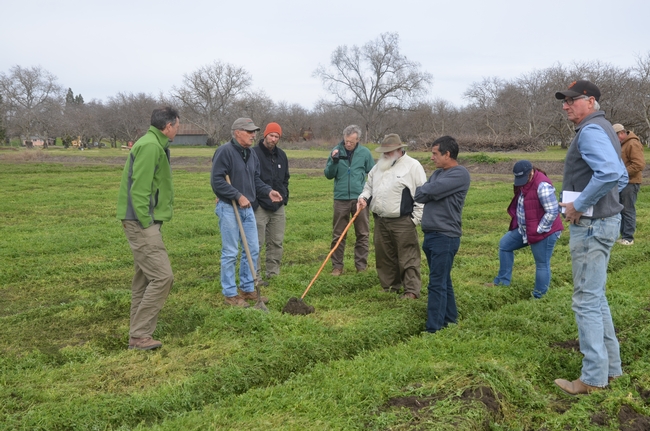 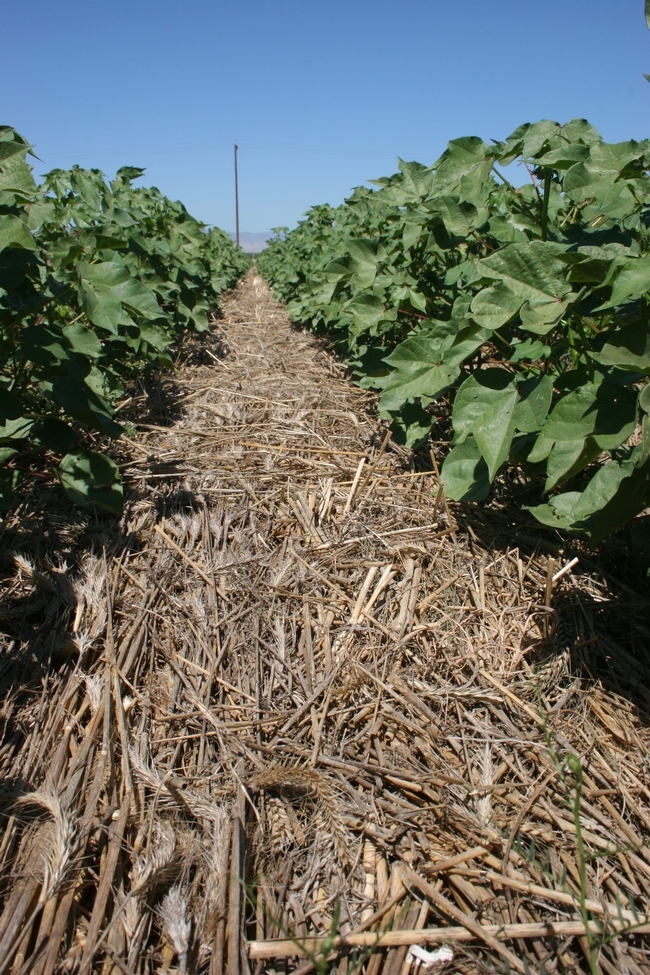 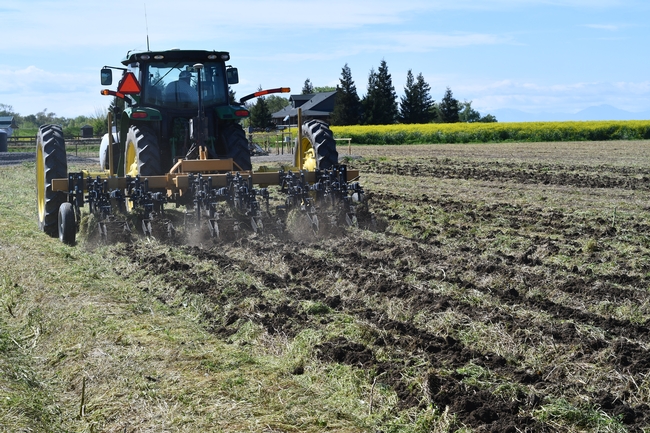